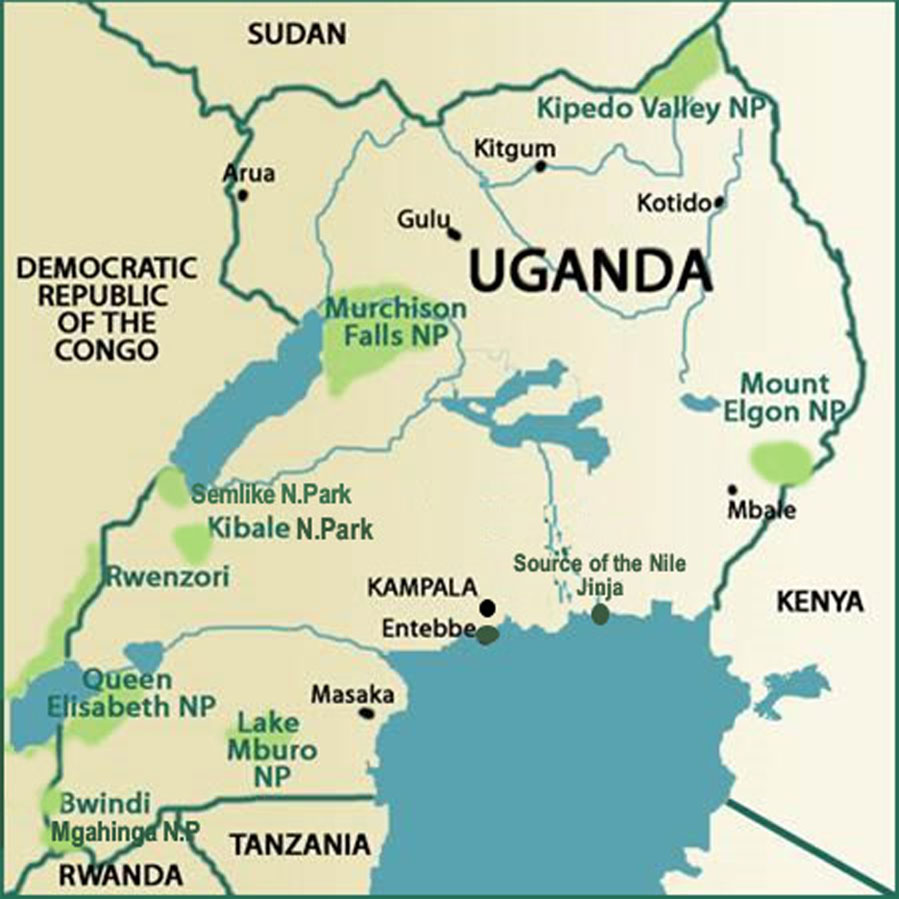 Located in the southwest about 400 km from Kampala, Queen Elizabeth National Park is Uganda’s second-largest and most popular conservation area. Its 1,978 square kilometers were first gazetted in 1952 as Kazinga National Park, but its name was changed two years later in honor of a visit by the British monarch.
The park’s popularity is principally due to its breathtaking biodiversity. Spread across the Albertine Rift Valley, the park offers savanna, acacia woodlands, tropical forests, fertile wetlands and lakes within its borders, providing safe haven to over 600 bird species and 95 mammals, including elephants, hippos, African leopards and 10 species of primates. No wonder the QENP has been recognized by Birding International as an International Birding Area.

Two of the park’s unique wildlife experiences are chimpanzee tracking in the Kyambura Gorge and sighting the unusual tree-climbing lions, which perch in the giant fig and acacia trees of the Ishasha sector. Other highlights are the two-hour boat ride along the Kazinga Channel; guided walks through the dark Maramagambo Forest; and cultural encounters with local communities, like the salt workers at the Lake Katwe evaporation pans.

Famous as the location of Murchison Falls—the thunderous cataract where the Nile River squeezes through a six-meter gap and then plunges 43 meters—the park is also a magnet for birders and animal lovers. The 450 species of fowl recorded here include the rare shoebill stork and many endemics, while the 76 mammals include four of the Big Five (all but the rhinoceros, which live in special protected isolation at the Ziwa Rhino Sanctuary).

Although game drives are a customary means of scouting for wildlife here, a special game cruise on the Nile is a relaxing way to take in the park’s changing landscape. The views of the water’s edge and up to the falls are not to be forgotten, as is the hike from the boat landing to the falls, which are visible from below and above.

Although small—just 321 square kilometers—Bwindi Impenetrable National Park is of crucial importance as home to the world’s largest population of critically endangered mountain gorillas. The park contains about one-third of the 1,000 or so alive today, with the remainder in the Virunga conservation area shared by Rwanda and Congo. (For more about the gorillas and the experience of visiting one of Bwindi’s 10 habituated gorilla groups, see Tracking Gorillas: The Bigger Conservation Picture.)

Preserved on the edge of the Rift Valley in southwest Uganda, Bwindi was established in 1991 as part of the conservation effort to save the mountain gorillas. Three years later, this island of remnant forest—one of Africa’s richest and oldest (dating back about 25,000 years)—was recognized by UNESCO as a natural World Heritage Site.

Beyond the gorillas, Bwindi is full of other life. In fact, it is one of the richest ecosystems in Africa, with 120 species of mammals, 350 species of birds (earning it the title of the Best Birding Destination in Africa by Travel Africa magazine), 200 tree species, 310 butterfly species, 88 moth species, 51 reptile species and 27 frogs, geckos and chameleons.

The humans of Bwindi are also notable. The indigenous Batwa people were exiled from their historic lands when the park was created. They now reside in an adjacent buffer zone, from which they lead tours that teach visitors about their age-old hunting, hut-building, honey-harvesting, agricultural and trapping practices, as well as sharing traditional music and dance.

Two things stand out most about Kibale National Park—its world-famous endangered chimpanzees and the diversity of its habitats.

A medium-size park (795 square kilometers) contiguous with Queen Elizabeth National Park, Kibale is a rare expanse containing both lowland and montane forests, including the last large tract of pre-montane forest in eastern Africa. Altogether, more than 350 tree species have been registered in the park’s lush and variable woodlands.

Kibale is especially popular with visitors seeking out its habituated chimpanzees, as well as 12 other primate species.Spend a day with a Uganda Wildlife Authority guide to learn how chimpanzees are habituated and discover other forest inhabitants.

In addition to the chimps, more than 50 other terrestrial mammals and 350-plus species of birds take advantage of their freedom of movement along the important 180-kilometer wildlife corridor, of which the park is a part.

Like Bwindi, Rwenzori Mountains National Park was gazetted in 1991 and recognized as a UNESCO World Heritage Site three years later, in light of its mountain flora biodiversity (the greatest in Africa). Its 996 square kilometers in western Uganda are flush against the border with the Democratic Republic of the Congo and serve as a stunning backdrop to Queen Elizabeth National Park.

Dominated by its famous “Mountains of the Moon” (the source of the Nile), the park is a world-class destination for hiking and mountaineering. Safaris here move through a mixture of ecosystems that include rainforests, alpine meadows, and a wonderland of glacier-carved and lake-filled valleys. These abound with rare montane vegetation and more than 70 mammal species (many of them endangered) and 217 bird species.

Visitors will also find the discovery of Bakonzo culture through village walks to be just as entrancing.

Once a controlled hunting area and then a game reserve, it became Uganda’s smallest savanna national park in 1983. It is now the protected home of 350 bird species and 69 animal species, including zebras, buffalo, leopards, and hippos. It is also the only park in Uganda with impalas.

Lake Mburo, around which the national park is wrapped, is part of a 14-lake, 50 km-long wetland system that was declared a Ramsar Wetland in 2006. The wetland system accounts for only about a fifth of the park area, the rest of which is spread over savanna and woodlands.

Some of the most common park pleasures are birding on the lake (one of the best birding spots in Uganda) and in the nearby Rubanga forest. There are also game drives, guided nature walks to salt licks and cultural experiences with local Banyankore community groups.